Broadway is My Beat - Single Episodes 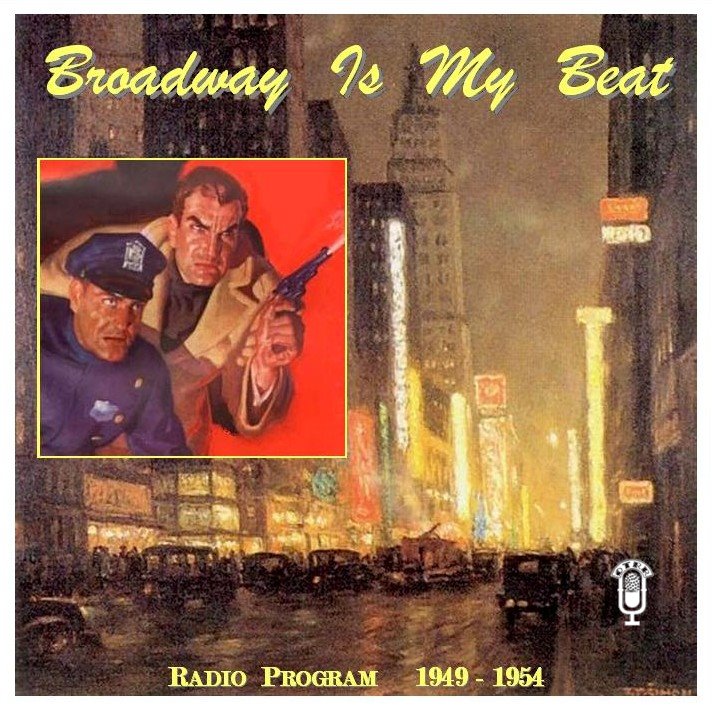 Broadway is My Beat - Single Episodes

Broadway's My Beat, a radio crime drama, ran on CBS from February 27, 1949 to August 1, 1954. With music by Robert Stringer, the show originated from New York during its first three months on the air, with Anthony Ross portraying Times Square Detective Danny Clover. John Dietz directed for producer Lester Gottlieb.

Beginning with the July 7, 1949 episode, the series was broadcast from Hollywood with producer Elliott Lewis directing a new cast in scripts by Morton Fine and David Friedkin. The opening theme of "I'll Take Manhattan" introduced Detective Danny Clover (played by Larry Thor), a hardened New York City cop who worked homicide "from Times Square to Columbus Circle -- the gaudiest, the most violent, the lonesomest mile in the world."

Danny Clover narrated the tales of the Great White Way to the accompaniment of music by Wilbur Hatch and Alexander Courage, and the recreation of Manhattan's aural tapestry required the talents of three sound effects technicians (David Light, Ralph Cummings, Ross Murray). Bill Anders was the show's announcer.

OTRR Broadway is My Beat

- Old Time Radio Researchers Group
Reviewer: ForrestG - favoritefavoritefavoritefavoritefavorite - November 27, 2019
Subject: A ballet of script and acting and believable SFX
I have been a Professional Actor for nearly 40 years,
I grew up listening to real "make-believe world: created by incredibly skilled actors and actresses who had talents to interpret the emotions the writers had put into every word.
The skilled sound effects people who made my mind see the action.
So why did so many of the great programs, actors, actresses and writes not succeed in the TV era?

BTW, judging by the voice, it is my opinion that both Detective Muggavin and Dr. Csinski were played by Jack Kruschen.

Today we think of Broadway in terms of theaters and shows - but there is hardly any of that in this program. Instead, this Broadway is a portrayed as it must have seemed to most of the people of the time - a place of saturating colors, exotic attractions, and broken dreams.

Danny Clover is an unusual main character because he has genuine flaws. He has the impatience of a New Yorker. The program opens with Larry Thor reciting lyric observations about the season of the year, the feel of the city and what was becoming known as the "rat race". But, heaven forbid that Detective Muggavan should spend one extra adjective trying to find meaning in a seeming senseless active violence - Danny Clover is all over him to "get to the point".

And while he has obvious affection for Gino Tartaglia, he can barely force himself to get through a truncated version of a workplace greeting before his patience wears thin. And Danny - would it kill you to once, JUST ONCE, actually make it over to Gino's house for some of Mrs. T's home cooking?

Gino is one of the three great supporting characters in this show - Sgt. Muggavan and Doctor Czinski being the other two. The glimpses of Tartaglia family life, Gino's moods and ruminations, and his love of great works of fiction like the adventures of "The Twanger" are always amusing. But, in addition to the daily interactions between Danny and Gino, and Danny and Muggavan, there is the larger workplace relationships - Gino insisting that people knock on Danny's door, Gino and Muggavan bickering, Muggavan annoying Danny by answering his phone. There is some depth to the workplace that you don't find on other shows.

The relationship between Detective Danny Clover and Doctor Czinski is also exceptionally well done. These are two men who are battered by what they experience, who search for meaning, and a sense of peace, in the face of violence and death. There are times when their personal communion runs deep - and then there are times when Danny is impatient and cuts the Doctor off, demanding he get to the point.

There are two minor recurring characters worth mentioning - Doctor Gordon of the crime lab, and Detective Dennison, who played a roll similar to Muggavan, presumably when actor Jack Kruschen wasn't available. Doctor Gordon is a button pushing gas bag that Danny Clover cannot stand - their verbal battles a short but memorable. Sgt. Dennison is a bit of a smart ass - his needling of his superior, Lt. Danny Clover, after Danny loses a woman he is following in the subway is very well written and played.

One of the things I love about old time radio shows is the way it opens a window into a world that existed before I was born. While the ubiquitous use of cigarettes is one element that jars a modern listener, what floored me was the change in the way we view first aid. Danny Clover and Muggavan will arrive on the scene of a stabbing, observe that the victim is hanging by a thread between life and death - and they will do nothing but stand around, questioning witnesses and waiting for someone with a stretcher to show up and carry the victim away to a hospital, where treatment can begin. (Almost always, unsuccessfully.)

While the "whodunit" aspect of the show is there - you can find that in many detective shows. The mystery aspect of the show is well done, and usually depends as much on the character and psychology of the suspects as it does the traditional "clues". Where the show excels is in the excellent writing that deftly creates quirky characters reacting in ways that seem entirely authentic to strange situations like violent death and being questioned by police. The journey to finding the killer, and people you meet along the way, are better than the scene that finally reveals the killer. (Don't expect any concerns about any of the suspect's Miranda rights - another difference.)

Still, the best thing about the show is that all this great dialog and detective work happens in a month that is vividly described in Larry Thor's poetic narratives, and in the exposition of the stories. The locations - the tenements, the luxury apartments, the hotels, the subway - are all brought to life (although if you binge-listen to the entire series, the number of times you hear a street address of "1212" will start to stand out.) And within those discrete places and times of the year, the rhythm of hustling and broken dreams and a search for connections comes through.

Must agree with “Police Chief” about the Clover - Barret scenes, you can hear the depth of the relationship between the two of them in even the shortest exchanges.

I'm 2 episodes into the Wrigley's sponsorship and even their crass commercialisation can't spoil it, but oh dear, the music – especially when the corpse is discovered!
Reviewer: Police Chief - favoritefavoritefavoritefavoritefavorite - November 8, 2008
Subject: Serious Omission
The cast of "Broad is My Beat" has a serious omission here of Anthony "Tony" Barrett.

To illustrate his creative talent, Barrett was praised by Ayn Rand for his portrayal of the protagonist Equality 72521 in her novella "Anthem" which was broadcast on radio in September 1950.

She wrote to Barrett to personally thank him. She wrote that despite the limited material of a radio script that he had to work with, he made the voice of Equality 72521 come alive for her like she never imagined possible.

One of the best 'Broadway is My Beat" episodes is the "Georgia Gray Murder (April 28, 1951) which starred Barrett as Tommy Chandler. No human being could have played the Chandler character better than Barrett. If you want hear OTR at its best, listen to it: dialogue and music were the finest ever produced for radio or elsewhere.

All the scenes with Danny Clover (Larry Thor) and Tommy Chandler (Barret) and particularly near the end is the best radio acting I have ever witnessed. A terrifying scene that follows is the best portrayal of horror from the voice of an actor ever (in this case Barrett's). The concluding line of Thor is sheer genuis in creative writing. For me, this episode of Barrett's work was stunning in its excellence.

I tracked him down on various You Tube clips of the 1949 (?) Hollywood film "Impact" with Brian Donlevy, to see what Barrett looked like. Handsome, but his film acting doesn't compare to his brilliance as a radio voice and actor.

Barrett went on to TV and some films, but did quite a lot of TV script writing.

Uploaded by Lum Edwards on September 6, 2008